According to the official Weibo “Ping An Beijing/平安北京” on Sunday (September 11), the official Weibo of the Beijing Public Security Bureau, the Beijing police recently seized a 35 -year -old actor Li in a case of violations of the law. The report pointed out that “the person confessed to the facts of many illegal facts, and he has been in administrative detention according to law.” 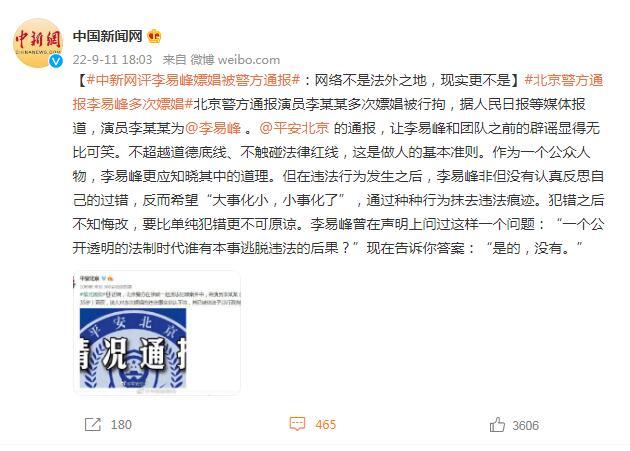 CCTV subsequently verified with relevant departments that the actor Li was Li Yifeng.
Li Yifeng, 35, debuted in 2007 and was debuted by the draft program in 2007. In 2014, the costume drama “Sword of Legends/古剑奇谭” was performed as a first-line male star in China. In 2016, he won the Best Supporting Actor Award for the Hundred Flowers Award for the Mass Film Awards with the movie “Mr. Six/老炮儿“. Li Yifeng has more than 60 million fans on Weibo.

In fact, long before the aforementioned briefing, many netizens took to the Chinese Internet to allege that Li Yifeng had been officially banned for visiting prostitutes.
Li Yifeng was originally scheduled to be propagated for a certain brand of brand on Friday (September 2) in Hangzhou. As a result, the event was absent for no reason. Subsequently, he reported that he was temporarily unable to show up for his arrest.
In this regard, Li Yifeng opened a live broadcast on the same day and emphasized that he failed to go to Hangzhou due to the epidemic caused. According to Chinese entertainment self-media reports, Li Yifeng’s live broadcast was only 3 minutes. He did not respond to whether he was suspected being suspected during the live broadcast.

On the other hand, according to CCTV’s previously previewed Mid-Autumn Festival Gala program, Li Yifeng was to make a solo performance on Saturday night, but CCTV deleted Li Yifeng, and his performance in the updated program was released in the afternoon. According to reports, CCTV’s Mid-Autumn Festival Gala is broadcast in recorded form, and Li Yifeng’s show was recorded more than 10 days ago.