Dong Yunrong, 79, has recently become the most popular ‘rock grandmother’ online in China. She has become a ‘big internet sensation’ in ShakeYin because of her singing. A video of her singing “Because of Love/因为爱情” was retweeted by Faye Wong. In just one week, the number of video views exceeded 1 million. She and her companions formed a rock band that sang all over CCTV channels and many Chinese TV channels, and also worked with big names such as Jam Hsiao, which became popular all over the Internet.
In 2005, her partner of 37 years passed away suddenly due to illness, and Dong Yunrong was bitter for a long time, “staying at home and hardly going out”. 2007, she saw a newspaper about a guitar class in a university for the elderly, and with the encouragement of her children, she brought a guitar she had lying around at home and found her stage at once.

“When I was young, I loved music and felt that playing the guitar and singing could definitely take my mind off my troubles. Dong Yunrong started learning guitar in her 60s, so you can imagine how much effort she had to put in. When I was old, my memory was not good, so I had to memorize them, “When I was cutting vegetables, I put the lyrics in the kitchen and memorized them while I was cooking. Sometimes, my hand hurts from pressing the chords to wash the dishes. 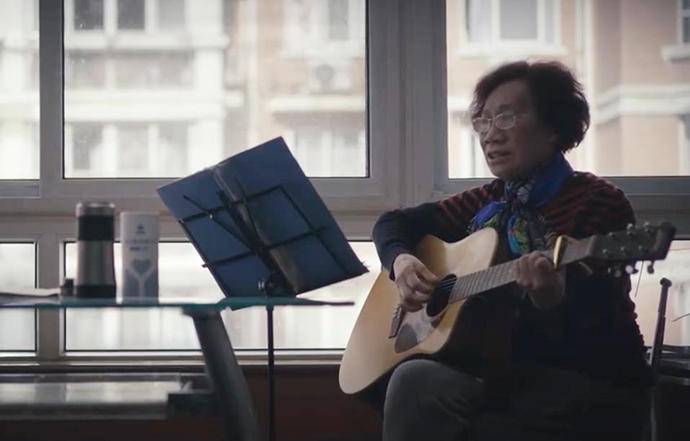 When she takes her granddaughter to school, she has to take out the songbook to memorize the chords on the way. On weekends, her granddaughter carries her school bag and she carries her guitar, and the two of them go to the Children’s Palace together, where the children learn the electronic piano and she practices the guitar outside. There were 30 people in the guitar class when it started, but by the end of the first semester, only four were left, and Dong Yunrong kept going until the end.

Slowly, not satisfied with simple covers, she began to compose her own songs. That winter you looked into my eyes and said this time you go first ……” because her partner liked to send her blue silk scarf before she died, after learning the guitar, Dong Yunrong specially wrote a song “Blue Silk Scarf” to commemorate her partner.

One person playing the guitar is not too much, she pulled her classmates from work together and played in a band. Every time they rehearsed, they played at one of the ten scenic spots in Hangzhou, “Quyuan Fenghuai”, which was named “Fenghuai Guitar Team”.

Once, she uploaded Jay Chou’s “Rainbow” and sang while playing, “How can I sleep if I can’t see your smile”. Netizens were surprised that such an old grandmother could rap, and the number of hits reached 270,000 at once.

In 2011, Dong Yunrong released a video of herself playing and singing “Because of Love“. Unexpectedly, the video was retweeted by Faye Wong with the comment “My liver trembled when I sang it”. In just one week, the number of hits exceeded 1 million.

Dong Yunrong instantly became an internet sensation and was called “Grandma Vibraphone”, which led her to appear on the stage of “China’s Got Talent/中国达人秀“. On the stage, she sang softly, and her voice was so melodious that judge Yi Nengjing couldn’t help but get red-eyed: “Grandma Dong’s singing voice is like the voice that came out of the phonograph years ago, singing to the heart of people.

In May 2018, Dong Yunrong led the band on the stage of CCTV’s Xingguang Dadao/星光大道. This time, the director proposed to try rock style, “the elderly sing rock contrast, the effect must be particularly good. Sure enough, with white hair, wrinkles, leather pants, sunglasses and electric guitars, the song “Blooming Life (怒放的生命)” was a hit.

The 87-year-old Grandpa Tian defies old age and walks faster than everyone else, one inattentive person can get lost; 81-year-old Grandpa Hong’s partner just died, so he has to take care of his emotions; the other two slightly younger ones have to be reminded to bring their blood pressure medicine and presbyopic glasses.

The key is that Dong Yunrong herself is 79 years old. In another year, if she wants to fly out to perform, she will need a certificate from the hospital to board the plane. But such a team, wearing leather pants, vests, sunglasses and guitars, immediately “transformed”.

The band also changed its name to “Rock Granny Band/摇滚奶奶乐队“.

After the broadcast of “Xingguang Dadao“, Dong Yunrong and her band’s fame grew so much that they went to various mainland CCTV channels five or six times, not to mention other local channels, such as Shandong TV, Shanxi TV and Hunan TV.

“We sang with Jam Hsiao, and Liu Yifei even took the initiative to come over and take a picture with me, but my favorite Jay Chou has not yet met …….” Speaking of the stars she has met, Dong Yunrong has become an avid groupie.